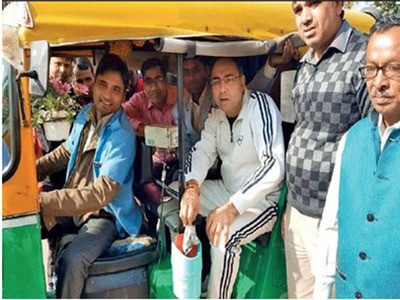 39-year-old Deepak Dhap, who is an auto driver by profession, has been appointed as brand ambassador for Jaipur by city mayor Ashok Lahoti for Swachh Survekshan 2018.  He has been appointed as a flag-bearer to encourage sanitation in the city. Deepak keeps a dustbin in his rickshaw and makes his passengers aware of cleanliness.

In an interview to media day after his appointment, Deepak said people still are not much educated about sanitation.

Here are the extracts from his interview.

What’s your feeling after being appointed a brand ambassador for Jaipur?

It’s a rewarding moment for me that I have been given an opportunity to make a symbol in society. I belong to Valmiki (Dalit) community and people still do not notice our work. They are role models for many youths in this country. My appointment has set an example that each of us can make a difference in the society.

From where did you extract an idea to put dustbin in your auto-rickshaw and encourage people to keep surrounding clean?

After I was suspended from my job in 2010, I started carrying young school kids for the past three years and observed children throwing wrappers on the roads after eating chocolates and chips. After I failed to stop them, I bought a small dustbin for them and asked to throw garbage in it. My idea was supported by the kids.

What difficulties did you face?

How do you want to take it ahead?