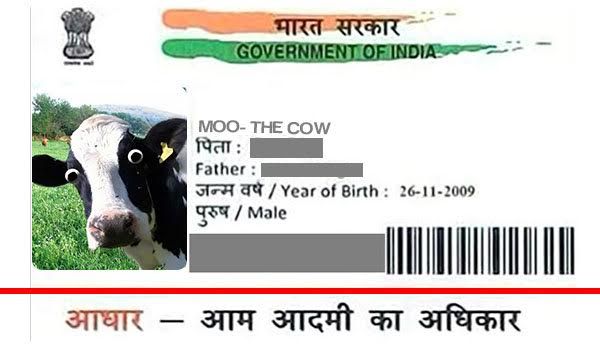 The Narendra Modi government is all set to assign 12-digit Aadhaar number just like for every Indian citizen to each of the country’s milk-producing cows.

A dairy department official, seeking ambiguity, said the agriculture ministry, which will execute the programme, has already gained the UID technology. This UID card will cost low as comes with a cheap, tamper-proof polyurethane tag. This card will be containing the cow’s biological details such as breed, age, sex, height and special body marks. Cost of each card will be between Rs 8 and Rs 10.

This UID scheme has been termed as Pashu Sanjivini and is part of a larger programme for the dairy and fisheries sectors.

These sectors have an important role to play in doubling farmers’ incomes by 2022, which is the target set by the government.  And is impossible to get alone from cultivation according to economist and reason behind this is a small portion of land available to farmers for agriculture.

This budget announcement is pro-poor, finance minister Arun Jaitley on Thursday spoke on two important development funds (which includes Fisheries and Aquaculture Infrastructure Development Fund and an Animal Husbandry Infrastructure Development Fund) worth Rs10,000 crore. About Rs200 crore has been set separately for an artificial insemination drive to improve cattle breeds, with a motive to improvise the nation’s entire cattle population.

Recommendation of UID by government committee was given in 2015 for cows to prevent trafficking following a Supreme Court direction that heard an appeal to stop cattle smuggling.

According to the 2015 special committee’s recommendations, “holder of cattle will be responsible for registration. “Registration proof must be conserved by the holder of the cattle which may be transferred to the next owner in case a legitimate sale/transfer takes place”.