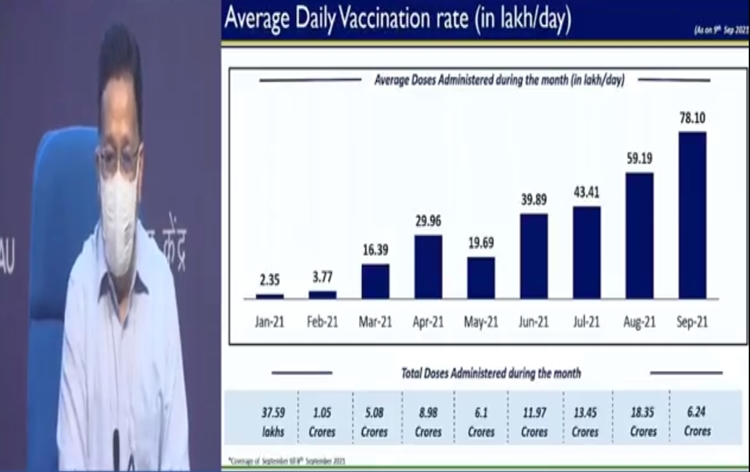 Union Government today said that more that 72 crore COVID-19 vaccine doses have been administered in the country till now.

Briefing media in New Delhi, Union Health Secretary Rajesh Bhushan said, the pace of vaccination and coverage is rapidly increasing. He said, the average per-day dose administered has increased from 20 lakhs in May, 2021 to 78 lakhs in September, 2021.
The Secretary said, this number is expected to climb even higher. Mr Bhushan said, 18 per cent of India’s adult population has received both doses of COVID vaccine and 58 per cent have been administered at least one dose. He said, in Sikkim, Dadra and Nagar Haveli, Himachal Pradesh all people above 18 years got at least one dose of COVID-19 vaccine.

Mr Bhushan said, 35 districts in the country are reporting weekly COVID positivity rate of over 10 per cent. He said, in 30 districts it is between five to ten per cent. The Secretary said, over 43 thousand cases were reported in last 24 hours and over 32 thousand are from Kerala. He said, almost 68 per cent of total cases in last week from Kerala. Mr Bhushan said, overall declining trend is a little less than 50 per cent which was there in first wave.

He said, the public health response to COVID must be guided by the fact that although the cases are declining, the second wave is not yet over. The Secretary said, India’s active caseload has declined to three lakh 93 thousand 614 since the highest reported peak of 37.45 lakh active cases on 10th of May. He said, a consistent increase in recovery rate is observed which currently stands at 97.5 percent as on date. Mr Bhushan said, during the festive time people need to follow COVID Appropriate Behavior.

Director-General of Indian Council of Medical Research Dr Balram Bhargava said, government is developing a COVID-19 vaccine tracker with synergised data giving a week by week of doses. He said, it will be up on the Health Ministry’s website in a few days time. Dr Bhargava said, low-key celebrations of festivals should be encouraged to avoid the spread. He said, responsible travel rather than revenge travel should be practiced.

Member (Health) in NITI Aayog Dr. V. K. Paul said it is clear that two doses show complete protection. He said, 58 percent of people above 18 years are given a single dose and it should be 100 percent. Dr. Paul said, no one should be left behind. He said those left should get administered to develop herd immunity.
Dr. Paul said, vaccinating children is not a condition for reopening schools. He said, this criterion is not acceptable anywhere in the world, no scientific body, epidemiological evidence suggests it as a condition. He said, however, vaccination of staff is desirable.