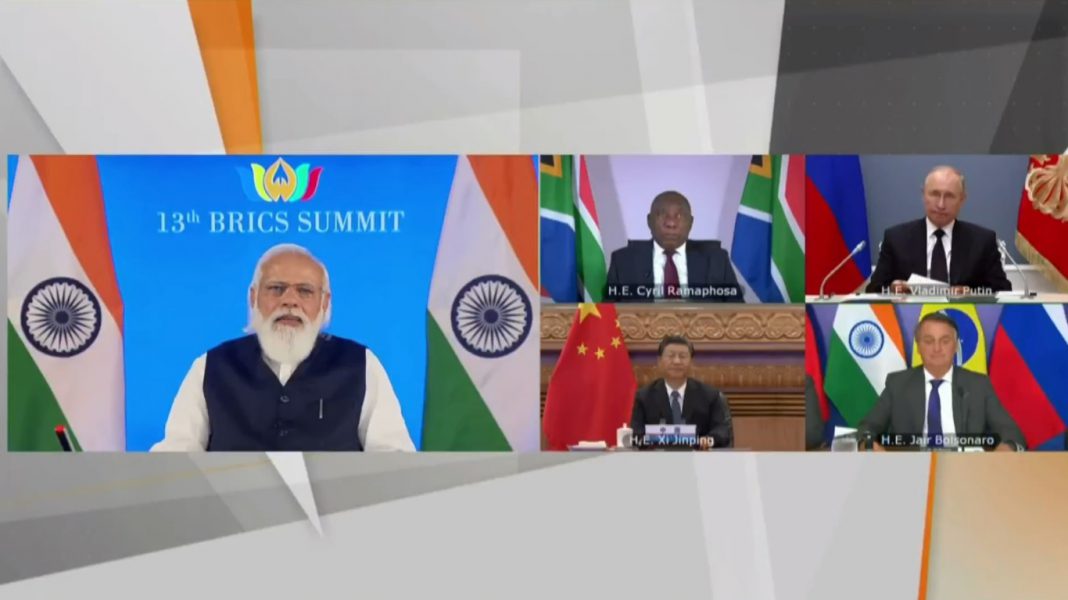 Prime Minister Narendra Modi today said that BRICS has made many achievements in the last one and a half decades and it is an influential voice for the emerging economies of the world. In his opening remarks, while chairing the 13th BRICS Summit in virtual format this evening, Mr Modi said, the platform has also been useful for focusing on the priorities of developing countries.

He said, BRICS has started several strong organizations such as the New Development Bank, Contingency Reserve Arrangement and Energy Research Cooperation Platform. Mr Modi said, it must be ensured that BRICS is more productive in the next 15 years. He said, the theme that India has chosen for its leadership is – ‘BRICS at 15 – Intra-BRICS Cooperation for continuity, consolidation and consensus.

Mr Modi said, the four Cs will be pillars of the BRICS partnership. The Prime Minister said, recently, the 1st BRICS digital health conference was organized and it was an innovative step to improve health access with help of technology.

He said, in November, the Water Resources Ministers of the five members countries will meet for the first time in the BRICS format. Mr Modi said, the BRICS Counter-Terrorism Action Plan was adopted recently and the Space Agencies of member countries are also working together in remote sensing satellite constellations.

He said, Intra-BRICS trade will get easier with better cooperation between the customs departments of member nations. Thanking all the members, Mr Modi said, India has received full cooperation from all members during its chairship of BRICS.

As part of India’s ongoing chairship of BRICS in 2021, Prime Minister Narendra Modi is chairing the 13th BRICS Summit. This is the second time Prime Minister Narendra Modi is chairing the BRICS summit. He had chaired the Goa summit in 2016. The Indian Chairship of BRICS this year coincides with the 15th anniversary of BRICS.
The summit is expected to focus extensively on the situation in Afghanistan.